I'm gradually trying to move my AP work indoors. To this end I've just replaced my Sony A300 DSLR with a Canon 1300D. With its far better reolution Liveview, the Canon allows me to do all the focusing and image sequencing using the APT software on a laptop. The missing link was a remote focuser, and so I set about making one. It took only a few hours and I think it's an elegant solution. The focuser was built for a Celestron scope but I suspect the basic idea would work with most makes. It requires no modification whatsoever to the 'scope so the warranty won't be affected.


I've put these notes together so that others can build a similar device. This is only intended as a guideline, how it's built will depend on what you have available. I built this at zero cost because it was based on what I could find in my junk boxes (of which I have many). I even had the motor, left over from a beehive weighing project I was doing two years ago. 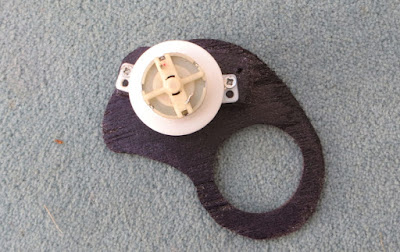 The assembly is based on a piece of 5.5mm ply with a 50mm hole in it and a block of wood to take a 12vdc geared motor (very cheap on eBay). On the telescope, the T adaptor collar is unscrewed, the ply placed over the 50mm boss and then held in position by screwing back the collar. This has the advantage that it is not necessary to drill any fixings and has the added huge bonus that it can be rotated to give plenty of adjustment to drive belt tension, as it moves the motor relative to the fixed focuser knob. The T adaptor threaded collar has to retain the 1.25" eyepiece holder as well as the ply, so a bit of shimming was necessary. Easy enough to get right. 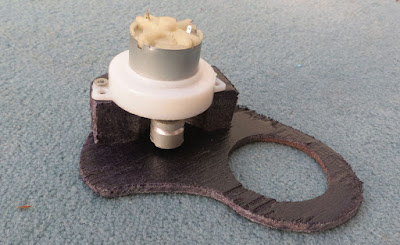 The motor needs a small drive pully and on full power the motor does about 4 revs/minute - just right for focusing. 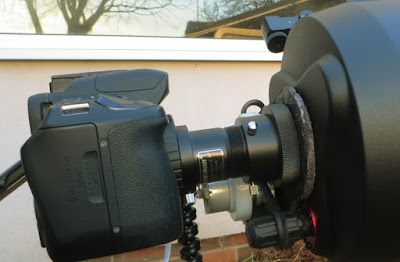 The assembly all fits within the diameter of the scope body to avoid it catching on anything when slewing. The drive belt shouldn't be too elastic so as to avoid delays and over-runs on focusing. I used a thick rubber gasket that doesn't stretch at all under the low tension I set up. 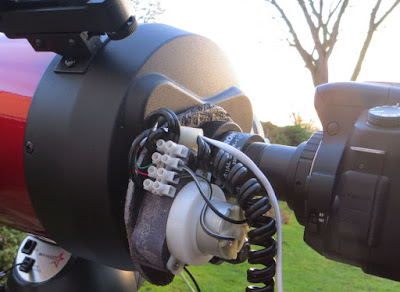 The motor is powered by the same 12v battery unit that drives the scope and which sits on the instrument tray so as to add a bit of stability to the tripod. As it happens the power unit  has two standard cigarette lighter sockets, one not used. The hand held controller is a small box with a changeover switch. A spring loaded two way rocker would be ideal but I only had a changeover slide switch so used that together with a pushbutton in series with one of the supply lines so as to allow very short stabs of power drive. I wanted a plug/socket at the telescope end and what I had to hand was a 5m telephone extension with 4 wires - ideal. So I cut off the socket with a foot of lead for the scope end and the other, longer, piece connects to the box. Basically it's a matter of feeding 12v and return down two of the wires, wiring them to a changeover switch and sending back the 12v and return to the motor over the other two wires. There's a 4 way terminal block on the wooden block that has the motor, into this connects a two wire cigarette lighter power plug with a curly lead, and the 4 wires to the control box. 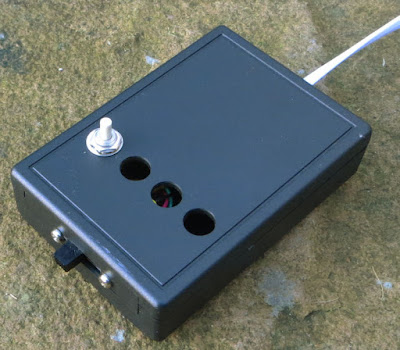 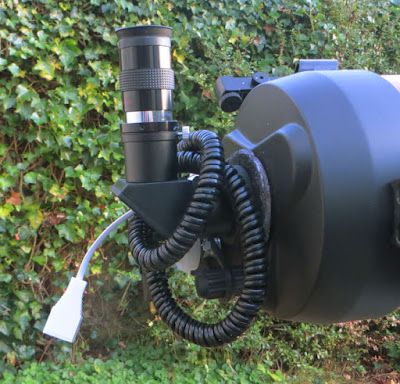 Using the motorised focuser there is now no image vibration at all while focusing - such a marked improvement over focusing by hand which always set the image dancing.

I've also put together a 5m extension cable for the Celestron hand controller. It's just a matter of locating a compatible 6 wire phone extension cable on eBay, then geting a suitable socket to replace one end. It's not easy, but do-able. Buying a pre-built extension would be a wise move for those not so experienced in fiddly soldering jobs.

So I can focus and control my scope from my cabin which is a few metres away. The scope can stay outside in the cold where it belongs and I can stay in my warm cabin, where I belong.